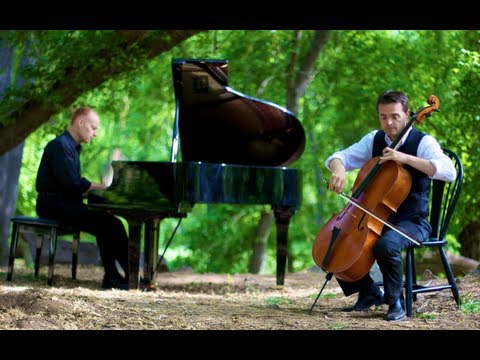 Story behind the song:
Our kids give us great inspiration for our music. When Jon’s 17-year-old daughter said how much she loved this song, Jon decided to try it. He experienced a flood of inspiration. “Never has a piano part come
together this fast,” Jon says. Steve experienced similar inspiration
while composing the cello parts. Since the lyrics suggest a bride
walking towards the groom in a ceremony we thought we would include a quote from the Bridal Chorus by Wagner in the climax of the song. (It is carefully disguised).

As it seems to always go, Paul and Tel didn’t find the spot until they spent 9 hours driving around southern Utah the day before the shoot looking. After getting a little discouraged by not finding anything that great, they just happened to check out a little-hidden spot right near Baker Dam and thought it was perfect for the song. The next morning we all loaded up the piano and headed out there to film, but after getting the Truck and Trailer stuck and waiting for the sun to move, we didn’t get started filming until that evening having about 3 hours of light. It was so fun to film and play in the middle of the trees!