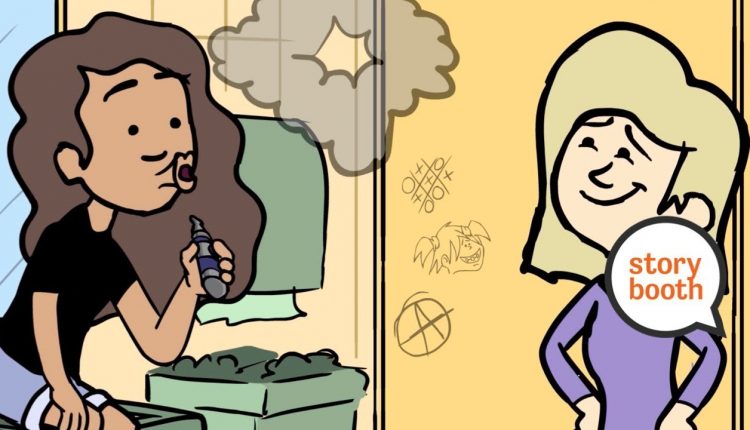 I Got Caught Vaping At School

It was a few days before the last day of school and the start of summer vacation. All the kids were totally excited and pumped to be done with school and there was just a lot of crazy energy in the halls and in classes.

Roxy met up with her best friends by the lockers and one of her friends asked her if she could bring her vape to school the next day. Of course she said yes because this was one of her best friends, and it was the end of the school year, and they were all feeling a little bit bold and defiant.

Now, the vape wasn’t technically hers – she wasn’t legal age (underaged) to be buying vapes or vaping – it was her older brother’s and he was old enough. So the next morning she snuck into his room before school and grabbed his vape and hid it in her backpack. She felt weird and nervous even just having it with her, and her dad thought she was acting weird in the car on the way to school, but she kept it together.

When she got to school her friends were all there waiting for her and they want off to find a safe place to vape where they wouldn’t get busted by the teachers and principal and principals or hall supervisors. But the hallways and stairwells were crowded with kids and teachers and supervisors and the only place that seemed safe and private was the girls bathroom.

So Roxy and her friend went into the girls room while their two guy friends stayed outside and sort of stood guard in front of the door. They started vaping and making thick clouds of smoke and passing it back and forth. Suddenly one of their other friends came in and wanted to know what they were doing.

It wasn’t very smart of her maybe – she was really risking getting caught – and she was truly just kidding around, but Roxy blew a big cloud of vape smoke right into the girls face and started laughing. After that they left all went off to class.

Little did Roxy know that that girl who had come in to see what they were doing, and saw them vaping, immediately ran off to go snitch on her and get her caught for vaping at school. She went straight to the principal’s office and reported her.

Roxy and her friends were sitting in class when a school supervisor opened the door and whispered something to the teacher. Then the teacher called out for Roxy and she raised her hand and the supervisor came to her desk and asked her where her backpack and school things were. Roxy knew she’d been caught and was so scared, so, instead of grabbing her own backpack – she really didn’t want to caught for vaping at school, didn’t want to get punished or worse, suspended, grounded – she grabbed her friend’s backpack instead.

The supervisor walked her to the vice principal’s office who essentially told her that she had been caught vaping and that she needed to pat her down and look through her stuff. Since it wasn’t really her backpack there wasn’t a vape inside, but since she had accidentally grabbed a boy’s bag, it became pretty obvious that it wasn’t hers.

After trying to keep the lie going and failing, she finally gave up and just told the truth. She got caught vaping at school and there was nothing she could do about it. They brought her friend to the office, and her actual bag, and when the vice principal realized how they had all tried to fool her and get one over on her, she got really mad. She yelled at Roxy and told her how badly she had broken her trust.

Roxy’s parents got called and her brother had to come and pick her up. She got suspended from school – SUSPENDED – and then, really totally grounded for the whole summer. No phone, no friends, nothing – fully and totally grounded is almost an understatement.

She learned her lesson in a big way. Those couple of puffs of nicotine vapor cost her the entire summer, and then some. You know what her message is – vaping was not worth it!

What’s your story? storybooth wants to hear it!